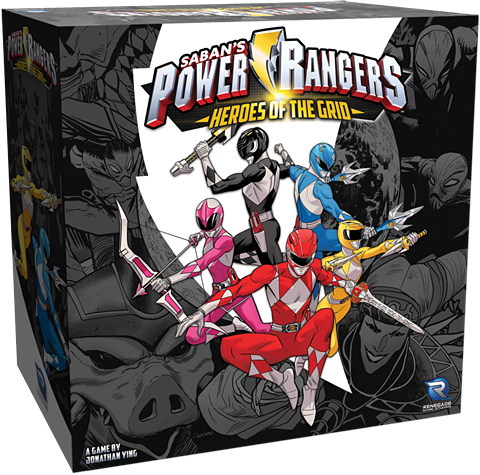 San Diego, CA (August 1, 2018) — Renegade Game Studios and Hasbro are excited to announce the team-up of the year! Power Rangers: Heroes of the Grid is a co-operative board game by famed designer Jonathan Ying that challenges 2-5 players to save Angel Grove from Rita Repulsa’s evil army of monsters in real time. All the classic characters you know and love come to life on the table thanks to Dan Mora on art and amazing, over-sized plastic miniatures.

Show your support for this game by backing the Kickstarter (launching on August 14th)! Sign up for the Power Rangers newsletter and be first in the know on campaign updates, news exclusives, and more!

EVIL IS COMING…
In Power Rangers: Heroes of the Grid, up to 5 players become Power Rangers to battle the forces of darkness using martial arts, teamwork, and giant assault vehicles (known as zords)!

Included in the core game experience are brutal enemies like Rita Repulsa, Pudgy Pig, Madame Woe, and relentless swarms of Putty Patrollers all for the Mighty Morphin’ team to tackle!

THE SHATTERED GRID EXPANSION
From a twisted reality where the Rangers have fallen, Lord Drakkon has risen and formed a deadly army to cross dimensions and threaten all of reality via the Morphin’ Grid itself!

The Shattered Grid expansion features new locations and challenging new foes directly from the pages from BOOM Studios’ award-winning comic series. Included in this set: The Ranger Slayer, Black Dragon, and of course, the mastermind himself: Lord Drakkon! But all is not lost, brand new allies from across time and dimension join in the battle: Power Rangers Hyperforce (straight from the hit series on HyperRPG)!

SEE THE GAME IN PERSON!
Playable copies of Power Rangers: Heroes of the Grid will be available at Power Morphicon in Anaheim, CA August 17-19. Stop by our booth to admire our morphinominal minis and learn how to play the game!