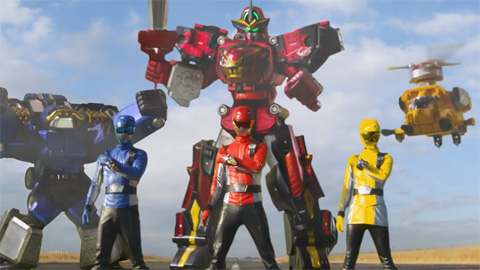 Just debuted at the Power Rangers Super Ninja Steel panel at Power Morphicon in Anaheim, io9 is proud to exclusively share the first trailer for Power Rangers Beast Morphers, set to air on Nickelodeon in 2019.

Using footage from the 2012 Super Sentai series Tokumei Sentai Go-Busters—initially skipped over by Power Rangers in favor of turning Zyuden Sentai Kyoryuger into Power Rangers Dino Charge—Beast Morphers is set in a near future where scientists have harnessed the power of the Morphing Grid (the energy field that transforms Power Rangers into their mighty heroic selves) itself to create powerful new technology.

Direct Link to the Trailer: https://gizmodo.com/video/3556118?utm_medium=sharefromsite&utm_source=Gizmodo&jwsource=cl

This is all well and good until a corrupted computer virus named Evox gains sentience and threatens to destroy the Earth. Combining the power of the Morphing Grid and animal DNA, only one fighting force can come together and stop Evox once and for all: the three new Beast Morpher Power Rangers and their Beast Bot sidekicks!