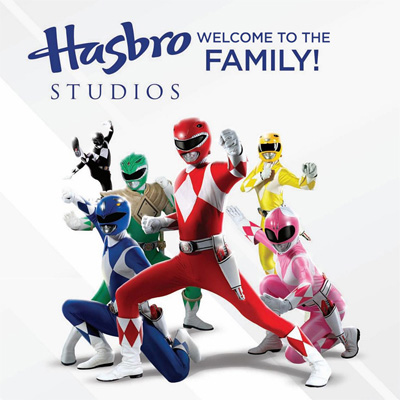 Hasbro is readying a licensing program for the newly acquired Power Rangers brand with plans to release a stylebook by year-end and having new products in place by mid-2019, Hasbro’s Casey Collins told at Brand Licensing Europe (BLE).

The new goods – apparel, back-to-school items, costumes and party goods – will take their cues from the Hasbro toy line due in the spring and the new 22-episode “Power Rangers Beast Morphers” series to debut on Nickelodeon in February. Hasbro bought the property from Saban Brands earlier this year.

In addition to the Nickelodeon series, Hasbro plans a Power Rangers live “entertainment event” June 20-21, says Collins. And the Power Rangers’ library of 850 episodes is available through Netflix.

Hasbro inherited a “pretty pared down” roster of licensing deals, the bulk of which expire this year or in 2019. It has been meeting with potential UK and European licensees at BLE this week. And it hired some former Saban executives Jessica Hardy, who is now Senior Director of Global Creative Design and Development at Hasbro.

“Now that we control the entertainment we are able to integrate new product offerings or ideas into the shows which will do more for our (licensing) partners,” says Collins. Licensees also will have broader access in some categories that were previously limited by Saban’s longstanding agreement with master toy licensee Bandai, which formally ends April 1.

While the focus now is on Power Rangers, it also plans to make other Saban properties – Luna Petuna, Popples, Julius Jr., My Pet Monster – available for licensing in 2019, says Collins.

Collins, who joined Hasbro from World Wrestling Entertainment earlier this year, says he is bringing a “more aggressive nature” and “more focus to where the opportunities are.” This potentially could include paring down Hasbro’s roster of licensees, something begun under Simon Waters, who now heads up the Power Rangers brand for Hasbro.