The Beast Bots are the Rangers’ Tactical Companions. Their circuits are infused with animal DNA. Cruise, Smash and Jax also function as the control consoles of the Zords. The Beast Bots can control their Zord on their own without a pilot.

Name: Cruise (Played by: Emmanuel Reynaud (Voiced by: Kelson Henderson))
Tactical Companion of: Red Ranger
Arsenal: Wheel Blasters (S2 Ep5)
Animal DNA: Cheetah
First Appearance: Episode 2
Info: “Unleash the Beast Bot!” Cruise is a little forgetful and will forget his own name. He can transform into a motorcycle for Devon. Cruise functions as the control console for the Beast Racer Zord.
Smash

Name: Steel (Played by: Reid McGowan (Voiced by: Jamie Linehan))
DNA: Scarab Beetle and Human (Nate’s DNA)
First Appearances: incomplete head Episodes 5-8; Episode 8
Info: Scrozzle steals parts from a special ops hangar brought in from Grid Battleforce. Nate is captured to build a robot body for Evox. Nate builds the robot but stops Evox from uploading himself into the body. Nate stands under the Neural Aligner in front of the robot and he is mutated with Praying Mantis DNA and becomes the Gold Ranger. The robot’s systems are bonded with Scarab Beetle DNA and Nate’s DNA, and Steel becomes the Silver Ranger. Steel’s arm can detach from body and can move and fly on its own. 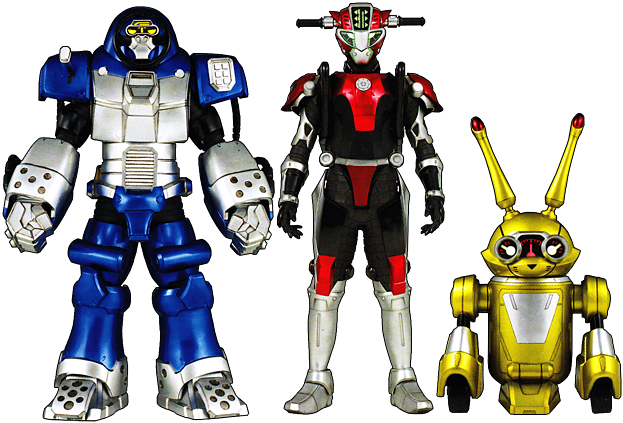