Before Mighty Morphin Power Rangers, There Was Super Sentai! 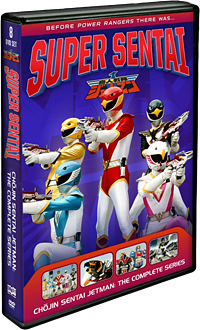 On September 25, 2018, Shout! Factory will release Power Rangers: Chōjin Sentai Jetman: The Complete Series, a fan-favorite installment of the original Japanese series that inspired the iconic Power Rangers franchise! Available for the first time on DVD, the 8-DVD set is presented in Japanese with English subtitles.

The hugely popular season Chōjin Sentai Jetman is the last Sentai season released that was not adapted for Power Rangers and the first pre-Zyuranger release for Shout! Factory. The long-awaited series is now available for the first time in North America and full of adventure with 51 episodes.

Sky Force, a defense organization tasked with guarding peace on Earth, has developed a new technology which gives the subjects superhuman powers. These people, now known as Jetmen, must band together to protect the planet after an attack by Vyram, an evil outer-dimensional organization bent on inter-dimensional domination.